May 2019 Circa 1910 B&O Railroad building at 2 N. Charles Street (2019 and ca. 1910). Designed by the firm of Parker & Thomas and finished in 1906 it is now the Kimpton Hotel Monaco Baltimore. The original headquarters for the B&O was destroyed during the 1904 Baltimore Fire, and this 13 story “fireproof” building replaced it and served as the home of the railroad for over 75 years.
Post a Comment
Read more

Walking Around Homewood - May 2019 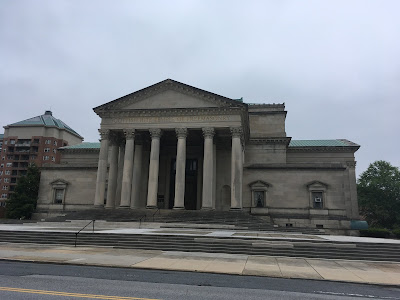 Recently, I started a walk around the Homewood Campus to stretch my legs and take a look at some of the buildings and sites that I normally just drive by and don't have the opportunity to stop and get a closer look. I began at the corner of 39th and N. Charles Street and walked south. Sitting at that intersection is the hard-to-miss Scottish Rite Temple of Freemasonry at 3800 N. Charles Street. From outward appearances the central portico and columns gives the appearance of the Baltimore Museum of Art, and it should remind you of it, since it was designed in part by the same architect and built around the same time. The Masonic Temple was designed by Clyde Fritz and John Russell Pope (It was Pope who also designed the BMA), and built between 1930 and 1932. Scottish Rite Temple - May 2019 Scottish Rite Temple under construction - ca. 1930-1932 Moving further south I stopped at the statue to Sidney Lanier (1842-1881). Lanier was a Georgian born author, musician, and po
Post a Comment
Read more

Getting Back into the Groove of Blogging about Baltimore

May 06, 2019
I took a four-year hiatus from posting anything here on the Baltimore Skyline blog for a lot of reasons. Part of it was pure laziness; I decided to post some things directly to the Facebook page instead, but even then I sort of just stopped doing that in 2017.  A big part of it was that I no longer worked in Baltimore starting in 2013, and I honestly did not get the chance to get out and take photos of what was going on around town. The family grew, work changed, etc., so the hours in the day seemed to be mostly full. Little time to dive into news, development projects, openings and closings. The funny thing is that with a growing family, I actually did get out to a lot of fun kid-friend events - trips to the Zoo, Science Center, Patterson Park, B&O museum, and so on - but I was more invested in who I was there with than anything else. When I wrote less about Baltimore, it became harder and harder to get back into it. After blogging for, at that point, over 7 years I found it cha
Post a Comment
Read more 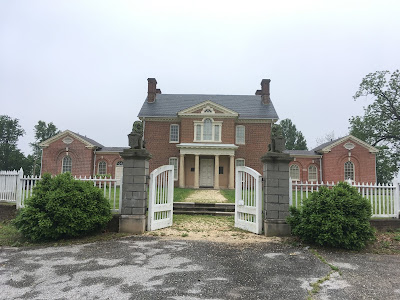 Carriage Entrance, May 2019   I recently visited Mount Clare mansion in Carroll Park, after living in Baltimore for almost 17 years, this was my first visit. The home of Charles Carroll, Barrister, member of the Second Continental Congress, it was built between 1756 and 1763 on Carroll family's 800-acre plantation "Georgia".   Baltimore City Landmark plaque, May 2019 The house originally had wings on each side of the house connected by hyphens. On the western side of the house was an orangery and greenhouse, and on the eastern side a kitchen, ice house, and a wash house. These structures apparently were demolished sometime after the house was sold by the Carroll family in 1840. The current wings were constructed in 1910 and originally held bathrooms. The Baltimore City Landmark plaque on the side of the building has a drawing of what the house would have appeared in ca. 1768. View of the front of the house from where the terraced gardens would have been, Ma
Post a Comment
Location: 1500 Washington Blvd, Baltimore, MD 21230, USA
Read more

photo by CB Maryland Casualty Insurance Co. circa 1920-1930 (photo by MdHS) The Rotunda :   Originally built for the Maryland Casualty Insurance Co. in 1920-1921. Later converted to offices, a mall, and longtime home of the Rotunda Cinematheque. Renovated again into a mixed-use space with retail on the ground floor along with the ICON Residences at the Rotunda which opened in 2016.  MdHS photos: https://mdhsphotographs.tumblr.com/post/26843707551/maryland-casualty-company-building-701-west-40th
Post a Comment
Read more

So Long Red Line, Thanks for All the Memories

June 25, 2015
So it looks like the end for the Red Line, at least in its present form; and with it the hope that Baltimore will get any new transit in the next decade. I started this blog back in 2008, and a lot has happened in 7 years: I got married, had a kid with number 2 on the way, bought a house, switched jobs - all of which has led to significantly less Skyline blogging. Anyway, I took a look back at one of the first posts I wrote about the Red Line in 2008. Back then it was supposed to cost $1.6 billion and be up and running by about 2016. Now he we are on June 25, 2015 with federal money committed and backed by Baltimore City and County, and then Gov. Larry Hogan finally pulled the plug on what turned into a $2.9 billion gorilla that wouldn't run until around 2022. There is more to this story, but I'll leave that for another time. What it all boils down to is this: Baltimore needs better transit. The Red Line wasn't perfect, but it could have worked. The real issue, however, i
Post a Comment
Read more 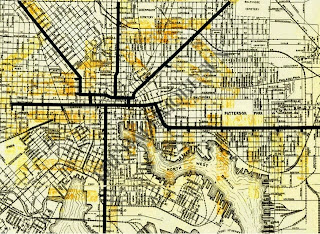 Baltimore Sun map from 1930s The Streetcar Subway: In the 1920s Baltimore floated the idea of burying its streetcar lines under downtown with a loop underneath Fayette and Baltimore Street. Streetcar lines along Pennsylvania Ave, St. Paul Street, and Gay Street would have funneled into tunnels at North Ave with lines from the west going into a tunnel under Baltimore Street, from the east under Eastern Ave along Patterson Park and through Fells Point, from the south under Hanover street through Federal Hill.  This would have created a very extensive subway system in central Baltimore, and would have in all likelihood, like Boston, SF, and Philadelphia saved much of the streetcar network. If this scenario had played out, places like Penn Station, Patterson Park, and the northeast would have been a quick underground trolley ride away from downtown.  Metro Subway to BWI: The original plan for the for the Baltimore metro called for a spoke-and-wheel system very much like the DC Met
Post a Comment
Read more
More posts

Promote Your Page Too